A sandblast chamber is a controlled environment where the abrasive media is controlled, recovered, cleaned, and reused several times. The booths are designed to protect the workers from the harmful effects of sandblasting and contain the debris created by the sandblasting process. Sandblast booths are an essential part of the manufacturing process for many industries and effectively reduce worker exposure to harmful dust and debris. 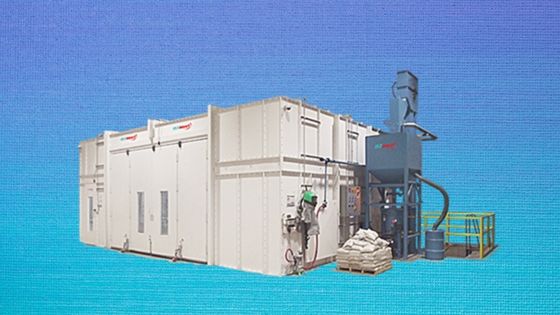 A sandblast chamber is where the sandblasting takes place. It is usually made of steel and has a door that allows workers to enter and exit. The booth also has ventilation to remove dust generated by such a process.

Sandblasting is a process in which abrasive media are blasted at high velocity against a surface to clean or roughen it. The benefits of sandblasting chambers are numerous, but one of the most important is the recovery and reusing of abrasive media.

In a sandblaster, the dust is created in the same area where the operation occurs. By keeping the containment area free of dust and other airborne contaminants, you can ensure a safe and healthy workplace for everyone involved. Thus helping to keep the area clean and increasing the visibility of the sandblaster.

It makes them ideal for businesses that need to blast large, challenging objects. Chambers with this type of construction can also withstand high pressure and temperatures, making them perfect for companies that need to work at high speeds.

Sandblast booths can accommodate multiple projects and applications. However, using different media types should be avoided in the same booth to prevent cross-contamination. It is good to go if one uses the same abrasive media.

Operators appreciate the safety of sandblasting chambers, as they are not exposed to the sandblasting process’s noise and dust. This is because they wear proper gear and air-breathing helmets. The controlled environment of the room also allows operators to work more efficiently and with greater precision. They also provide a space for sandblasting, preventing damage to nearby surfaces.

Components Of A Sandblasting Booth

The blast room is the heart of the sandblasting booth. It is where the abrasive material is blasted onto the surface of the workpiece. It is designed to contain all of the debris created by the blasting process. The debris is then eliminated from the contaminated room via an effective ventilation system.

Another critical component is the air compressor. It provides the air pressure needed to operate the pressure blaster.

Sandblast chambers are a great way to cleanse dirt, grime, and other particles from different surfaces. They are also effective in removing rust and other debris. You can use these chambers for metal, glass, and plastic materials. Wear appropriate safety gear for sandblasting chambers, such as respirators that cover your entire face. If you are considering buying chambers, do some research. Several high-quality custom-engineered booths are available from reputed suppliers.